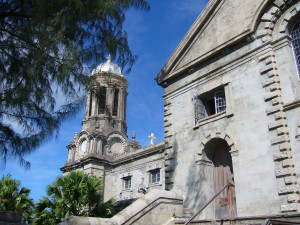 The early settlers in Antigua had the services of a clergyman, the Reverend Gilbert Ramsay, as early as 1634.  There were no church buildings then.  In 1670 the Island’s Council and House of Assembly found it necessary to make special provision for the celebration of marriage on the island and in the following year a provision was made for the building of churches at Falmouth and St. John’s.  The first Parish Church in St. John’s was not built however until some twelve years later.

In 1677, as a result of a report made by the then governor, Sir William Stapleton, the Bishop of London, the Right Reverend Henry Compton licensed six Ministers for the Leeward Islands and on the 1st November of the same year they embarked on the Olive Branch, arriving in Antigua early in 1678.

On August 20th, 1681, under Colonel Codrington’s government an Act of the House of Assembly was passed dividing the Island into five Parishes and making provision for the erection of a church in each Parish.  Provision was also made for the support of the respective clergymen by the payment of 16,000 lbs of sugar and tobacco to them annually. St. John’s Parish as then created is the same today.

The first Parish Church of St. John’s was built within the compound of the present Cathedral and Churchyard. The exact location is not known but it must have been somewhere south of the Cathedral itself. It was a simple, unpretentious wooden building, rectangular in shape, without a steeple and smaller than the building which subsequently replaced it.

This Church has been described by an old writer as being “totally destitute of beauty and comfort”. Nevertheless, this was the Church in which Sir Christopher Codrington and his friends, who were such devoted, enthusiastic and generous churchman, assembled for worship.

Within a matter of two decades or so, and during the rectorship of Reverend James Field, it became evident that this first structure was inadequate for the accommodation of all the members of the Church. Moreover the building itself was falling into disrepair and so in 1716, during the administration of General Walter Hamilton, the Island’s Legislature passed an Act granting provision for a new place of worship to be built and imposing a yearly tax for the purpose of keeping the Church in repair.

Mr. Robert Cullen was the architect and at his suggestion its site was laid to the north of the old building. 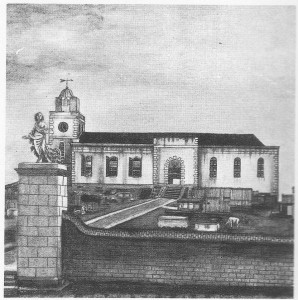 The erection of the Second Church was begun sometime between 1721 and 1723, during the period that John Hart was administering the Government of the Island.

A contemporary writer describes the Church in the following manner:

“The Church itself is of brick, washed a light yellow, is cruciform in shape, the north and south vestibules forming the arms of the cross.  …..The first tower was not completed until 1789, that is more than forty years after the main edifice had been completed but from being constructed of the same materials, presents a uniform appearance.”

In 1824, the Island became part of the newly created Diocese of Barbados and the Leeward Islands under Bishop William Hart Coleridge, who appointed the Reverend Parry, Rector of St. Philip’s, to be Archdeacon of Antigua. It should be noted that at this time all the financial support for the work of the Church and other expenses was supplied from England.  There were also additional funds to promote the religious and moral education of the people.

Upon the retirement of Bishop Coleridge in 1842 the Diocese of Antigua was created by Letters Patent, dated August 21st, 1842, and the Venerable Daniel Gateward Davis was appointed its first Bishop. It is reported that at that time the Diocese had “an enlightened and evangelical Clergy.”

The Members of the Vestry and the people of St. John’s were thrilled by the thought that the Church was to be elevated to the status of a Cathedral and began to make plans as to the most fitting way in which they could improve it to be worthy of that dignity, but all their desires and plans were shattered by the terrible earthquake which occurred on February 8th, 1843.

The following is an extract from the Minutes of the Vestry:

Memorandum of the Awful Earthquake

“On Wednesday February 8th, 1843 …the Island was visited by a most terrific and destructive Earthquake. At twenty minutes before 11 o’clock in the forenoon…. the whole edifice from one end to the other was suddenly and violently agitated. … Thus within the space of three minutes, the Church was reduced to a pile of crumbling ruins…”

The Council and House of Assembly immediately allowed the sum of £500 for temporary repairs. The newly appointed Bishop was in England. Archdeacon Holberton in the Bishop’s absence at once petitioned the Governor, Member of Council and House of Assembly, explaining that …. the Cathedral would have to be re-erected …. Eventually, the sum of £40,000 was allowed to build a new Cathedral from the loan of £100,000 made to Antigua by the Imperial Government. 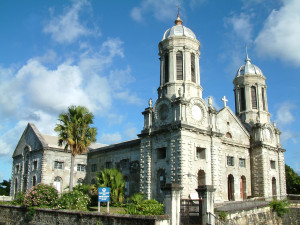 The corner-stone of the new Cathedral was laid on October 9th, 1845 By Sir Charles Augustus Fitz Roy, the Governor-in-Chief…

On Sunday October 10th, 1847 the Cathedral, under license from the Bishop, was opened for Public Worship. On July 25th, 1848, the public building was consecrated as a Cathedral and Parish Church of St. John and dedicated to the Service of Almighty God, and the celebration of Divine Service according to the rites and ceremonies of the Church of England as by law established.